Ocean energy is another form of harnessing the temperature and movement of water to create energy. Oceans cover more than 70 percent of the earth’s surface, making them the world’s largest solar collectors. The ocean stores thermal (heat) energy, which can be used to generate electricity using special turbine generators.

The energy of the ocean’s waves and tides can also be used to generate electricity with dams that force ocean water through turbines. This is called tidal energy, or wave energy. The world’s first wave power station is on the Scottish island of Islay. It generates enough electricity for about 400 homes. Wave energy uses buoys or other mechanisms embedded with turbines to create electricity as they shift with the movement of waves.

Scientists and engineers around the world are working on systems to use the ocean’s energy on a large scale. 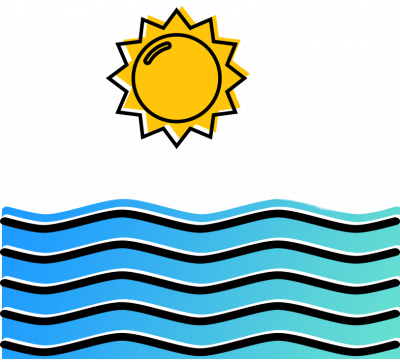 Fifteen miles off Florida’s Atlantic coast, the world’s most powerful sustained ocean current—the Gulf Stream—moves at nearly 8.5 billion gallons per second. Researchers estimate the current could someday be used to drive thousands of underwater turbines, producing as much energy as perhaps 10 nuclear plants and supplying one-third of Florida’s electricity.